Now that ride was an AD-VEN-TURE!

as I could, I was ecstatic to see that it had stopped snowing and the temperature had climbed up over freezing.  Everything was falling into place just like Dylan had predicted.

Until I got out on the road.  I don’t know what happened but the heavens opened up and it was snowing(hard) for my entire ride.  I can say that today’s commute was by far the most treacherous ride I’ve been on in a long time.  Anything other than the tracks made by the cars was a 100% kill 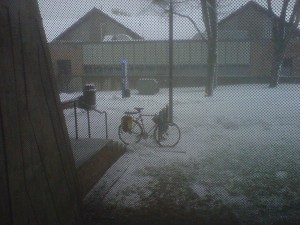 zone, the side streets and parking lots were a guaranteed fall.  I was sliding and riding sideways on more than one occasion.  Fortunately for me, I’m a reformed winter sports junkie and most of the slipping and sliding was fun for me.  Until there were cars involved that were playing the same game and sliding all over the place.

The major bright spot is that my winter gear seems to be working well.  With the addition of my foot solution, I was comfortable and dry the entire ride.  Even now, as I sit and write this post, I’m dry as a bone head to toe!

Overall, I made it through unscathed without any real close calls but in hindsight the whole ride was one big close call.  I just hope that the current break in snow fall holds true because I have to get back on the road in an hour or so and make my way to Boston.