This past weekend the GF and I decided to head over to West Boylston(it’s somewhere in Central Mass) not far from Worcester for an evening bike ride.  We wanted to get out and stretch the legs and use up all the daylight we had left.  She suggested this trail would be good because it was well-traveled, easy to get to and she had ridden it before. 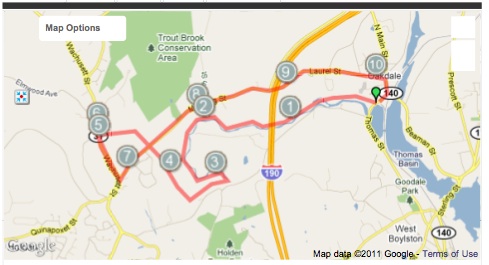 Ladies and gentlemen, there is a lesson to be learned here.  Always trust your instincts!  I live by some very simple words “because you never know” and they have treated me extremely well over the years.  Whenever I’m in doubt, just tack that phrase to the end of whatever I’m saying and I always end up prepared.  So when I picked up my bag with extra water, food, phone, and lights in it and asked “should I bring this?” and then tacked on “because you never know”, it was a no-brainer.  Alas, I failed to add those four little words and decided to go without.

The ride was great, the trail was nice, well-traveled, not too busy with some great scenery and some good ups and downs but nothing too extreme.  Perfect for what we had wanted; a relaxed 20-30 minute cruise in the woods.  Until we came to what at first seemed like the end of the trail but then revealed that it seemed to double back.  Without much hesitation I followed the trail confident it would lead us back from where we came.  I suppose I should have paid closer attention to my GF’s apprehension as we progressed along this part of the trail and realized this was unfamiliar territory to her.

Unfortunately, by the time I realized this we were well on our way and deep in the woods and loosing daylight fast.  By the time we came to civilized road we had about 40 minutes until sunset and I assumed about 20 minutes of usable light remaining.

I knew we were in trouble when the iPhone and the phrase “I think we’re here and need to go that way” came out.  After 3 trips back and forth on the same stretch of road and the kind assistance from a young man in a bad-ass red truck(who we had passed about 4 times already), we finally knew  sort of where we needed to go.  After a frantic 30 minutes and sneaking into the parking lot about 5 minutes after sunset. We had made it back!

Everything turned out fine and we spent the night drinking wine and laughing about our close call adventure.  I’ve been lost out on the road after dark before and we were 15 minutes and the kindness of a stranger away from being in some real trouble.  If only I had added “because you never know”, we would probably still have been lost but I would have had lights, rations and an ability to laugh about it all much quicker!