In yesterday’s post CarFree Conundrum, I was faced with the question of what to do when I’m forced to live BikeFree due to commuter rail schedule restrictions? 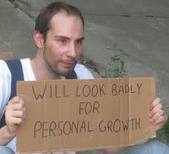 In an effort to avoid emotional and unwarranted rants, I have made it a point to give myself one nights sleep before posting about a rant subject (unless it’s just too clear that I have to).  This self-imposed “reflection period” has served me well thus far.  Some of my most passionate rant subjects seem to lose their power overnight.  I’m sure I’ve missed an opportunity or two for serious hilarity but the chance of incoherence is so high with each spur of the moment rant that it’s a sacrifice I’ll have to make.

I was all set yesterday to blast the commuter rail schedule and it’s restrictions for oppressing the CarFree movement and making it nearly impossible for those that really should be transitioning away from cars, those living outside the city, to do so, blah, blah, blah!

Perhaps being forced to live according to others schedules and relying on others to live my life has mellowed me out a bit.  Or perhaps it’s my new-found appreciation of a good walk that did it.  Regardless, since my bike is stuck in Brighton until further notice(hopefully Saturday) and I still have to get to work, I decided to go way old school and walk to the train station.  I took my time and made it in just under 20 minutes.  This seems to be just about the perfect walking distance that is still enjoyable in a tie and carrying a full bag.  Between the temperature, humidity and a slight breeze everything was going my way this morning and this is the least sweaty I have been getting on the train all summer.

Maybe it’s the perfect conditions today or the fact that I have a long weekend coming up but I found the walk to a be a nice change of pace and a great reminder that I have two perfectly good legs capable of taking me almost anywhere.  The most enlightening aspect of this slight shift in my morning commute was the eerily similar feeling I had going BikeFree as I had going CarFree.  It is amazing how quickly my bike has replaced my car as the thing that makes me feel secure and provides that sense of freedom as personal source of transportation.

Just as when I went CarFree, I found myself very much out of sorts attempting to leave the house and had to repeatedly check to make sure I had everything because I was convinced I had forgotten something important!

It’s a very unsettling feeling but the sort of thing that forces me to embrace what’s real and grow as a person.

Don’t worry, roller blades are still a very real possibility if I have to go anywhere over 2 miles in the next couple days.  I just have to find them!